If you have a scooter at home, you've probably heard of the term variator. In this article we will explain how the speed variator of your scooter works and how to get the most out of this component.

What is a variator?

The variator of a scooter is one of the most important parts of this type of motorcycle, since, without a manual gearbox, it is responsible for changing the ratios or gears of our scooter.

We will find located the variator of our motorcycle right at the beginning of the scooter transmission, connected to the crankshaft of the engine to transmit all the power it generates to the wheels.

Parts of a variator:

A scooter speed variator is composed of different parts, although depending on the type of variator, as we will explain below, these may change. The composition of a variator is as follows:

In any type of variator, we will find that the pulley is in direct contact with the belt and this is delimited by a semi-pulley that guides it.

There are different manufacturers in the market that produce this type of components for scooters, not only as a spare part in case the original one breaks down, but also to increase the performance of our motorcycle.

It is the most widely used and it is the one used by series manufacturers and some performance manufacturers, where the ramps, guides and weights of the rollers are modified to obtain other features.

In this type of variator, the rollers move longitudinally (rolling) to open or close the variator and transfer the motor power to the drive system.

The rollers run on ramps located inside the variator. Depending on the inclination or slope of the ramps, the characteristics and result on our motorcycle will be different. 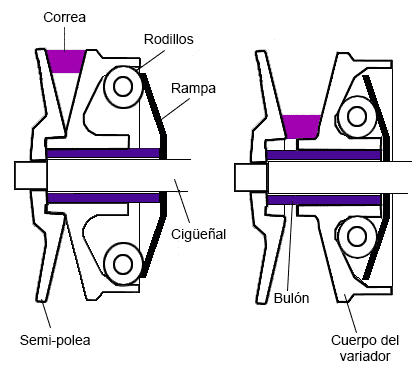 Diagram of a conventional scooter variator and its parts.

It is the less known but more efficient of the two, since it simplifies the operation and improves the features or benefits that a conventional one can offer.

In contrast to a conventional variator, in the transversal variator (also known as Axial transmission or Axial variator) does not have rollers but masses. The masses are counterweights made of Kevlar and a plastic compound that have a similar function to the rollers.

In this case, instead of the rollers moving longitudinally, the masses move transversely, applying force on the bell of the variator and causing it to move to open or close the variator.

The bell in a transverse variator is a key element, since it replaces the function performed by the ramps. The correct operation of the variator requires a correctly calibrated bell. 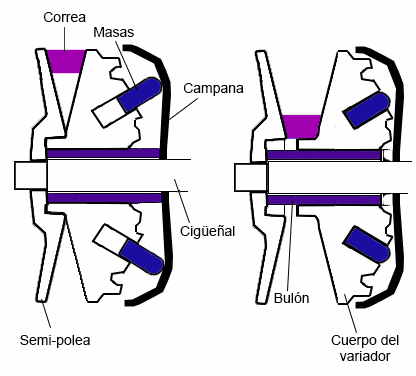 Diagram of a scooter transverse variator and its partss

Advantages of a transversal variator

By installing a transversal variator in our scooter, we will not only improve the performance of our motorcycle, but we will also gain in convenience and comfort in 4-stroke engines. With a transverse variator, we will compensate the small irregularities of a 4-stroke combustion engine because we reduce the internal friction inside the transmission group. 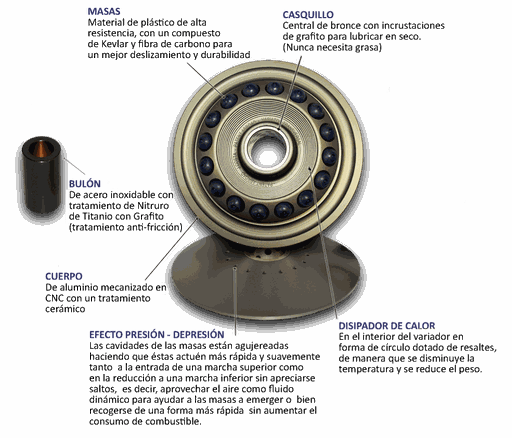 JCosta transversal variator and its parts

If we pay attention to the performance we can obtain with a transverse variator, we observe that we will gain speed both at low speed and at high speed. It will allow us to have more acceleration with the closed variator and more top speed with the open variator.

In many occasions, what is also obtained as a result of mounting a transversal variator, is that our engine works more relaxed. As a consequence, the engine will not suffer and can last more km than with the standard variator.

If you are looking for to improve the performance of your motorcycle or just do the maintenance to your scooter, visit our store and find your JCosta variator at the best price.